So I Tried... Tetris Effect

In each edition of So I Tried, a member of GameGrin staff makes a snap judgement on a game they have in their backlog. This time around, I took a look at a pricey Tetris game, and sought to find out if it is worth your time and money (£25, seriously?). 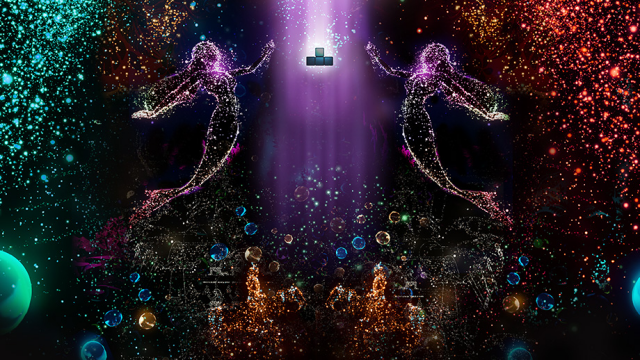 Intrigued, I watched a few trailers and checked out a few screenshots. The rough idea that I got from the marketing materials is that this is Tetris, but immersive. Also in VR. To me, it didn’t seem like a big enough deal to justify the commitment. I had to try to understand for myself why a Tetris game in 2020 could be so pricey, and whether or not it was worth the money.

Well, I was more or less right. But what took me by surprise was the attention to detail, and just how immersive it is. I started immediately in the games ‘Journey’ mode, in a level called ‘The Depths.’ A black screen greeted me with a few odd-looking fish swimming around and the unmistakable Tetris container. So, I started playing Tetris. The requirement was to clear 36 lines worth of Tetrominoes to clear the level.
As I progressed, the environment slowly started to change. The sea around me got brighter. The fauna became more populous. The music began ramping up. By the time I had cleared line 25, the whole Earth was in front of me – with a swelling score and vocals to boot. What I hadn’t initially noticed was that every move I made also built the soundtrack. Every rotation of a block, every decisive descent of a block; it was all playing musical notes - all in key, and in time with the music. The cherry on top was the vibration in my controllers to the beat of the music. Make no mistake; you’re playing Tetris. But man, it is immersive.

Oh yes! Once I started playing this game, I couldn’t put it down. The soundtracks and levels are expansive and varied. Genres swinging from pop, to folk, to syncopated Eastern music, even windmills somehow create a musical score. I can’t wait to see what other gorgeous environments and soundscapes take shape as a result of me arranging a few blocks. Tetris Effect is a surprisingly fresh take on the timeless classic, and I’ll definitely be committing 30 minutes here and there as a means to unwind after a long day. If £25 for a Tetris game is a little much (understandably), maybe wait for a sale and pick this up. Either way, it’s worth your time.

Prev
So I Tried

Read the full “So I Tried” series
First
Prev