So I Tried... Double Dragon Neon

I’ll be honest, I’m mostly expecting a shiny version of the old games. It’ll almost definitely be a lot more visually interesting because technology has come a far way since the original Double Dragon games. Due to its 2012 release year, I’m hoping there’ll be a lack of the modern-day trappings we’ve come to love and hate, oh, and almost definitely more balance. The old games were kind of brutal, which, if Double Dragon Neon is as brutal, I can see myself bouncing straight off it because if I’m not making progress in a game like this, I’m just going to give up on it. I’ve thought about giving Double Dragon Neon a shot for a few years now. Hell, I don’t even remember buying it, but it’s sat in my Steam library. Let’s see how 30 minutes of it feels and whether I’ll come back to it after this is over!

Turns out I wasn’t massively off in terms of gameplay, though there are some interesting additions that I didn’t predict. Magic is a thing in Double Dragon Neon, with your character having the ability to shoot off fireballs, and various other magical and non-magical techniques. Not only that, but you can equip various archetypes that change your stats, making you tankier, increase your magical prowess, as well as various other changes. If you told me Double Dragon would have stats and abilities, I’d never have believed you. 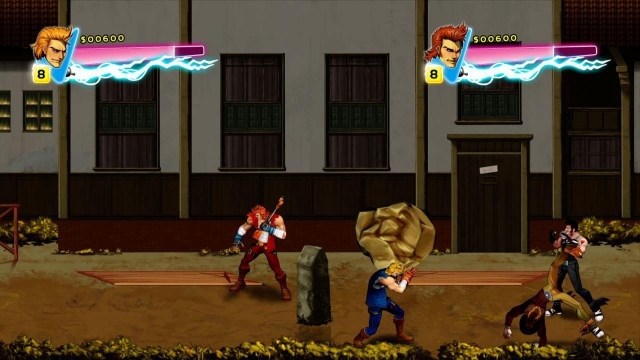 Shockingly, my first run through the first level of Double Dragon Neon ended in disaster. I died before long and realised that maybe just mashing my head against the controller wouldn’t work out in the end. The combat is mostly what you’d expect from a beat ‘em up, mash button until your enemy is knocked down, rinse and repeat. It’s simple, but it’s satisfying and there’s a nuance. You have to make sure you’re rolling away just before you get hit, as sometimes you can’t put an enemy into stun before they hit you.

Aesthetically, it’s ‘80s all the way. An era that I’ve not experienced first hand, due to being a ‘90s baby, but I’ve always thought the over the top colours were a strong vibe. Though, maybe I could’ve guessed the ‘80s vibe via the Neon part of Double Dragon Neon. Musically, the soundtrack is pure ‘80s goodness. You’ve got that sweet hair metal vibe. One of the things I enjoyed the most was a homage to Bill & Ted’s Excellent Adventures when you complete a level.

I imagine I’ll probably pop back to finish it off Double Dragon Neon at some point. Sometimes you need a random game to just pop on while you think about writing an article and I feel like Double Dragon Neon could be that palate cleanser. It’s an enjoyable game that you don’t really need to engage your brain too much to enjoy and, with the way the world is at the moment, maybe that’s what you need.