So I Tried... Life is Strange

It’s my turn to take on the So I Tried... series, and I think you all know the score by now. I’ll take a game that I have never tried before and play it for a solid half-hour, no matter how much I hate it, or how poorly I perform. Maybe I’ll find a new game to lose myself in; maybe I’ll find one to gather dust on my shelf. Either way, I decided to give the PC version of Life is Strange a go.

I really don’t know – I haven’t researched this one at all, and the only reason I have it now is because the first episode is free (shallow, I know, but heigh ho). I’m expecting some kind of drama that involves school, possibly some quick time events and multiple choices that lead to consequences – as long as I don’t start having sixth form related panic attacks, we should be all good.

Slow paced, linear and only a fraction as compelling as people had made it out to be. I think this is more of a ‘me’ problem than an issue with the game itself, but it has, for the most part, failed to present me with any interesting gameplay or narrative. I’ll be honest and admit to playing a little more than half an hour because this type of game is naturally slower than most, but even then I found myself looking at the clock and thinking of all the other games I could be playing. The thing that surprised me the most was just how often the game told me to go back in time and change my major choices. No, I’m not going to take back my paint-based revenge because it made the bully feel bad, so stop your whining. 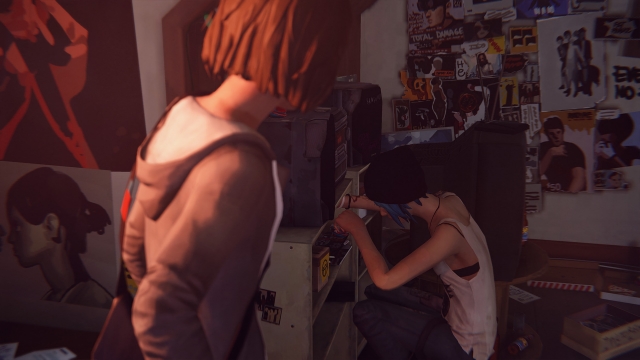 I’ll probably finish the episode, but unless it really picks up in the last few minutes, I won’t bother with the rest of the game. What can I say? I like being faced with challenges that test my dexterity and ingenuity, and Life is Strange failed to provide. Plus, if I see one more over the top American High School stereotype I’m going to hurt someone.

New Trailer for Life Is Strange: Before The Storm Episode 2 Lands

Like all games, Life is Strange isn't everybody's cup of tea. Episode 1 is quite slow-paced, but the series is definitely worth sticking with. It's one of them slow-burning openings that is required to make the rest so impactful.

Episode 2: Holy crap. This could be an amazing series.

Episode 3: Phew. This is incredible.

Episode 4: That was the best piece of fiction I think I've ever played/read/watched.

I'll admit to being very annoyed at the amount of stereotypes. But I don't think the characters which embodied those stereotypes actually had enough screentime to get built into well built characters. They put in all of the one dimensional characters, so that they could build up the main characters much more.

I thought that all of the characters had kind of grown out of their arcetypes by the end of the series, but I agree that it would have been nice to have seen people like Stella and Miss Grant with more screentime.