So I Tried... Saints Row

In “So I Tried…” a member of the GameGrin staff will crack open a fresh game, play it for a mere 30 minutes and report on their initial impressions of the title. Will this be the start of a new gaming love? Or is another disk destined for the bottom of the rubbish pile? This time, it’s my turn to roll the dice. As a longtime fan of the Saints Row series, there’s been a niggling sense of shame over never having tried the original Xbox 360 exclusive Saints Row. So, in celebration of several recent franchise developments, including an announced patch to fix Saints Row 2’s dodgy PC port and the confirmation of a long-awaited fifth installment, I’m going to dust off the game that started it all. Let’s give Saints Row a go…

Playing through the inconsistently titled Saints Row 2, The Third and IV can be compared to watching a celebrity go off the rails in the most outrageous, entertaining way imaginable. With that in mind, I pictured the first game as something akin to that celebrity’s early, “everything to prove” years. Relatively straight-laced, self-serious and —frankly— not as fun. I already knew that this first game was dismissed by critics upon release as a “Grand Theft Auto clone”, yet despite this I hoped there’d be some trace of the charm I’d come to love in the Saints Row series, but I was more than a little doubtful. 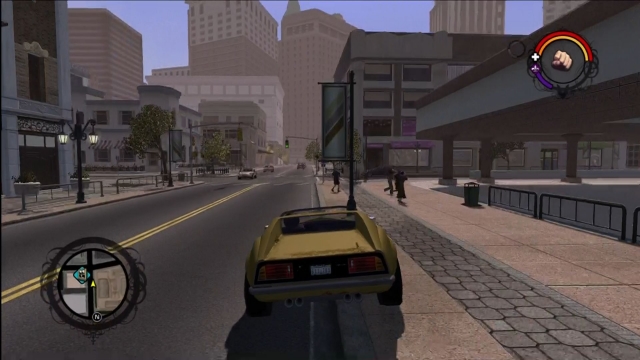 Mercifully, Saints Row plays things nowhere near as straight as I expected. Just in this initial 30 minutes I’d craft a protagonist with blue hair and “luminous” skin; almost inadvertently stumble into the inner circle of a street gang; and steal “hos” (AKA, a 13 year-old’s idea of prostitutes) from their cartoonish, garishly dressed pimps.

The DNA that makes up my beloved, recent Saints Row titles is present, albeit subdued. Johnny Gat —a symbol of the franchise’s chaotic reputation— makes an appearance as a fresh-faced loose canon, but seems relegated to the sidelines. He’s clearly waiting for the series to let loose before he comes into his own, like a crazed, spiky-haired dog on a lead. In the same vein, our protagonist is suspiciously silent this time round. I can only assume that they too would have been shut down by THQ’s censors should they have spoken their mind this early in the franchise. 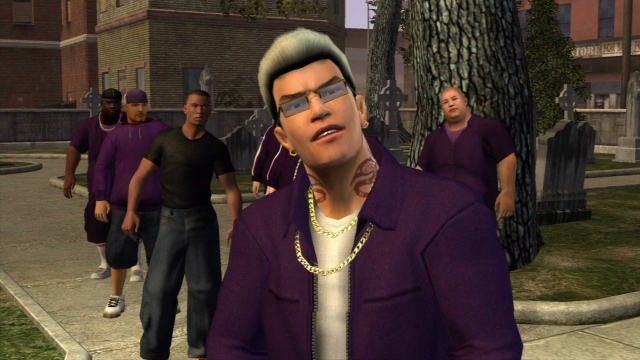 When it comes to enjoying this title, the largest hurdle comes in how dated it all feels. Wonky shooting mechanics, enemies that spawn before your eyes and RED BARRELS THAT DON’T EXPLODE WHEN YOU SHOOT THEM. All but that last example is forgivable however, considering the game’s age and the personality it weaves around everything. “Freckle Bitch’s” as a parody of American fast food chain “Wendy’s” stands out as an early example of the game’s juvenile but fun sense of humour.

Yes, if only to have a complete perspective of the Saints Row franchise from start to finish. It’ll also be interesting to see quite how close this first title comes to the absurdity of its sequels, and —if nothing else— I can enjoy the smooth, authoritative tones of acting icon Keith David as the Saints’ respected leader.

Saints Row Marches on to GOG With a Free Game

Playa does say a few things - but I believe they're in the final mission of each gang.

Keith David is, indeed, a fantastic addition to the cast.

Oooh, now there's my motivation to play to the end, gotta find out what the canon Saints Row protagonist voice is! Fingers crossed for Nolan North.