So I Tried… This is the Police

A strategy game where you play as the chief of police, and have to dispatch cops to crimes, while appeasing requests from City Hall and the mob. I’ve had a bit of a crime kick recently, which is why I last played Serial Cleaner, and that’s what made me pick This is the Police for my next try. 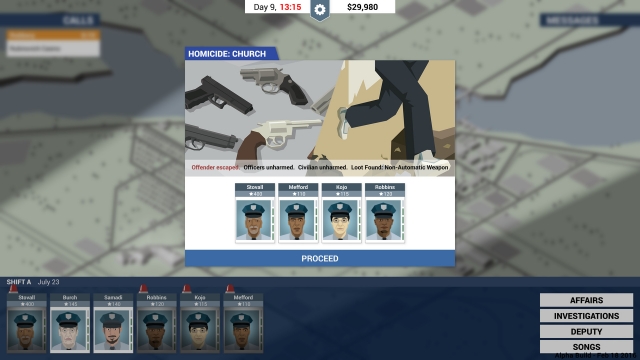 A slow burning game with a ton of story, about a police chief 180 days from retirement who wants to leave the job as loved as he’s always been (if a little richer). Honestly, I spent well over an hour on this instead of the usual 30 minutes for a couple of reasons. As I said, the story is quite intriguing, and the gameplay loop is deeper than it appears on first look.
You can start off sending cops to every crime that pops up, but you have to choose who goes -- experience, number of officers, whether they’re backed up by a SWAT team… Then you have to help the detectives investigate homicides and gang activity. After that you might start getting calls from the Mafia to ask for a favour or two.
Meanwhile, a local nightclub would like an officer to come help them out as a bouncer - you can ignore it, or you can make some money by sending them over. But if you do, the officer might take the rest of the shift off potentially robbing you of one of your best officers from the shift.
That’s another thing -- there are two shift rotations, which you will need to replenish with new officers, should one lose their life in the line of duty or even quit to become a bouncer. Heck yeah! There are still things I haven’t unlocked, and I’ll keep saying it: the story is great. The graphics are stylised in a similar fashion to Orwell (a game I loved), and then you choose the soundtrack for each day, so it’s nice to look at and great to listen to. That’s another reason I need to keep playing -- to buy all of the records. While I’m talking about the sound, the voice acting is really good… Look, I’m going to keep playing this, and I think that if you enjoy those games where you’re directing air traffic or train routes, you’ll like it too. 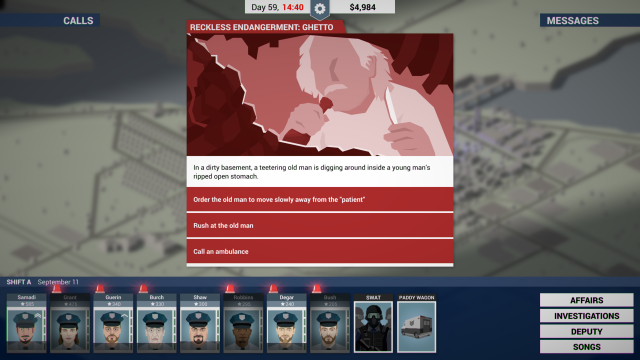 So I Tried… This is the Police

This is the Police Preview

This Is the Police