So I Tried… Budget Cuts

Each edition of So I Tried… involves a member of GameGrin staff making a snap judgement based on the first 30 minutes of a game in their backlog. For this edition, I had a go at Budget Cuts, a game I picked up as part of a steeply discounted "VR Essentials" Bundle during Steam's summer sale. Eclipsed by the likes of Arizona Sunshine and Superhot VR in the same bundle, I had no intention of playing it any time soon. Cut to three weeks later after I finished up with those games.

I didn't go in with too much information about this game. Based primarily on the first trailer on the games Steam page, it seemed a little bit like The Stanley Parable meets Portal meets Superhot VR. It features enemies that don't look too intimidating, with a simplistic and fairly ordinary art style. I also observed bland-looking environments that give the impression of a dystopian future where humanity is all but exterminated by their robot overlords.

To a degree, I was right. The player character appears to be one of very few humans employed at a sketchy 'Aperture Science' style company. They receive a phone call from a mysterious woman, informing them that their life is in danger and they need to escape. A simple enough premise and I can sense that the plot is about to thicken. What surprised me was that the gameplay was nowhere near as crummy as I expected.

As it turns out, Budget Cuts is the most polished story-driven VR experience I have played, alongside Half-Life: Alyx. The controls are intuitive, and it also uses an interesting twist on the now-standard teleport movement in most free-roaming VR titles. Players shoot a projectile to the spot they want to teleport to. Then a Portal inspired 'tunnel' appears at their fingertips – allowing them to survey the area they are about to move to before making a final decision on their movement.

An early instance of this function being useful was attempting to retrieve a keycard from an office cubicle which is being patrolled by an enemy sentry. Thanks to a conveniently placed note on my managers' desk, I knew that the keycard was in a specific cluster of four cubicles which I was looking at over a balcony. I checked each cubicle until I found the one with the keycard. I warped over, grabbed it, and back up to the top of the balcony before the sentry could complete their patrol route. 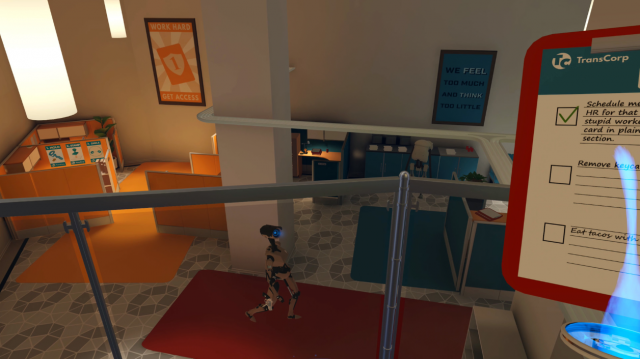 I was in and out so quickly, this guy was none the wiser.

The storytelling also seems promising from the get-go. After a short opening sequence familiarising the player with the controls, I step into an elevator and ascend. I'm greeted by a robot with his pistol pointed in my face, primed to fire. It cuts back to three hours earlier when the player receives their initial warning. The player character carries a pager which will occasionally buzz and display a four-digit number. The player will then need to find the nearest phone and input that number to get in touch with their mysterious messenger. Little details like this heighten the immersion that the VR medium can offer.

Based on the first 30 minutes, I am absolutely sold. Witty humour, stealth, strong world-building, and intuitive VR experiences are right up my alley. I'm hoping I will be able to fight back against my robot adversaries soon - especially if combat proves to be as intuitive as traversal. This is a medium that is finding its feet more and more, and this title by Neat Corporation demonstrates that you do not need to have Valve's resources to create a solid single-player VR game.