So I Tried… Pixel Piracy

A side-scrolling pirating game with pixel graphics. Roam the slightly large seas in search of booty and people to stab in a 2D environment. Pillage, rape, maim, steal and pirate! Yes, I be usin’ that word as a verb now, matey! 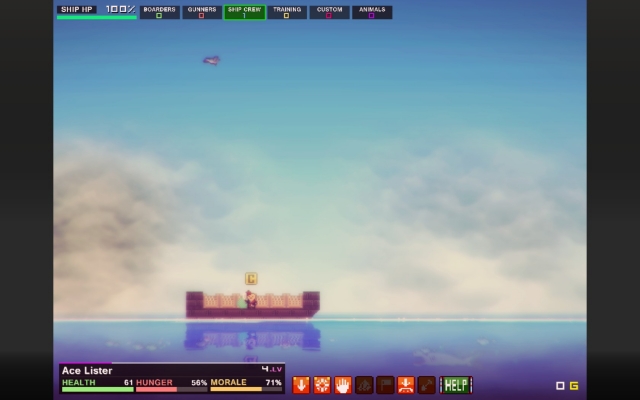 Certainly 2D pixelated pirates, not so much the violence. You’re given a ship and a crewman, then after a character creator and very brief tutorial you’re on your own. You’re tasked to kill the most dangerous pirates on the seas, so you can claim the rank of… most dangerous pirate on the seas. You move from square to square on the map, finding loot and killing those who oppose you when you get there. I thought there would be more sailing involved, but it really is as simple as double clicking on where you want to go. There are random encounters as you sail, but generally you go ashore to towns for supplies and bounties, whilst trying to find your quarry. It’s a roguelike, though you can reload the game if you do die, which adds a little urgency to the fights. Go with a cutlass up against two pirates with guns or crossbows: you’re going to want to run away or reload the game — or get ready to start again.

It’s certainly piqued my interest. The half hour went much quicker than usual, and I want to continue with my second pirate. I just upgraded the boat with some tall walls and am eager to find out what that does, if anything. I also want to save up for some cannons and have a ship battle, if that turns out to be a thing. I think it might be a case of grappling over to the enemy boat and stabbing them all, but I do want to see what happens.