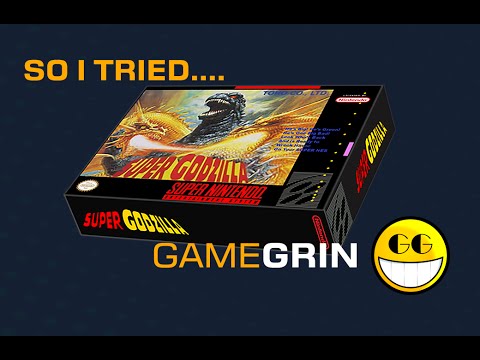 So I Tried Retro... Super Godzilla

A fighting game featuring the Japanese main-kaiju himself Godzirra Godzilla. Presumably like Street Fighter 2. The super part of the title obviously comes from the fact it’s on the Super Nintendo Entertainment System, purely because that was on a startling amount of games of the era. It’s not like there was ever Mega Battleship or Mega Double Dragon for the Mega Drive / Genesis, but Nintendo wanted to be flashy, I assume... Part-PAC-MAN, part-terrible beat ‘em-up, Super Godzilla is a tough game to come into out of the cold. It’s as if someone went into a room with a blind developer and described their two favourite games -- PAC-MAN and Street Fighter 2, as well as his favourite movie franchise, and had the blind developer create that game. With art duties provided by an outside studio… You control Godzilla -- or rather you control someone who is in turn controlling Godzilla -- as he tracks down other kaiju that are terrorising Japan at the behest of aliens. Movement is tracked via the lower part of the screen, and you watch Godzilla as he wanders about the place tracking down enemy kaiju (monsters), responding to your direction commands once every few steps. When you finally track one down, the fighting between the two is… confusing? You have to time your attack to hit when the power bar is the highest point, then have a small amount of time to hit with a follow-up attack. It took me about 10 minutes to work that out… You can move slowly left and right, but other than attack there are no other controls... Heck no. The plodding pace I could stand in the PS4 game Godzilla, but that’s because the battles between kaiju were a lot better than in Super Godzilla. With special attacks quite difficult to pull off, and when they do hit they aren’t very effective, it makes it seem like Godzilla is less King of Monsters, and more Godzuki. There may be a reason that Advance Communication Company only made nine other games, none of which were ever released outside of Japan… But come on, it took me fifteen minutes to almost defeat the first kaiju -- this is not a game I want to invest hours or days into.

This looks awful. I feel I need to acquire a copy for my Kusoge collection...