An older game where you control a team of SWAT against crooks, villains and ne'er-do-wells. I’m guessing FPS, but I haven’t checked the screenshots. I’m trying to go into these a little less informed, though I suppose it leaves these sections a little blank when I do… Cops and robbers, before I assume Rainbow Six did it better. After all, SWAT isn’t a franchise anymore, is it? 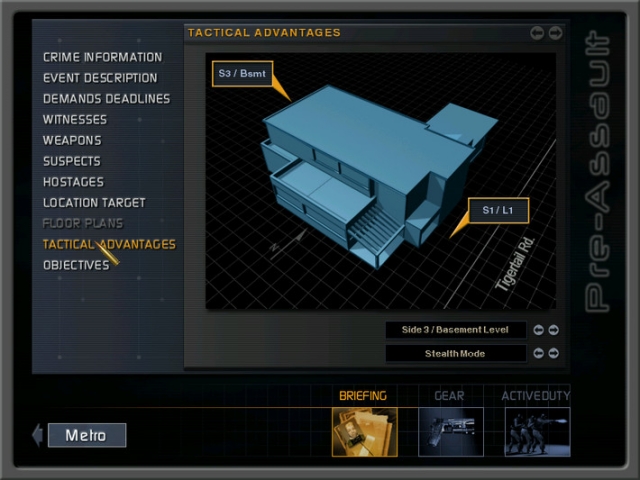 A team-based FPS from 2001, with average graphics. Oh, the United Nations were going to abolish nuclear arms as of 2005, according to this! Hah! But yes, the opening spiel talks of how the country needs to be calm whilst these UN discussions go on, which apparently means that SWAT has 7 days to stop crime. Yes, all crime.
You’re given various missions which involve you going into places to arrest dangerous criminals. Snipers, bombers, blah, blah… Okay, so I only played the two missions… Various weapons and items such as breaching charges, a mirror to look around corners, a multitool and such. 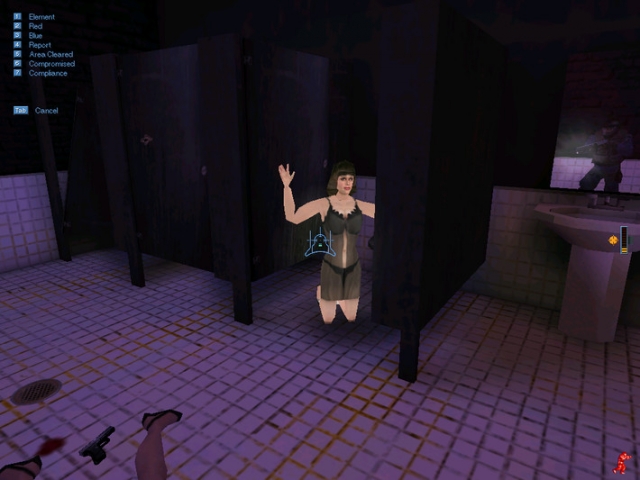 No, I won’t… There was no tutorial of any sort in the campaign, which meant I wound up failing objectives, despite stopping the sniper and finding the weapon, then stopping the bomber and his accomplice. I didn’t even shoot the first guy! Commanding the other members of the team is easy enough, with the number keys assigned to issuing all of the commands. You can do it solo, but as I couldn’t work out how to open the door without using a breaching charge, I could not. The handling is fine, the character models are good - but I don’t have the patience to learn how to control a game that doesn’t open the door when I press every single button.

Why SWAT 3, and not the massivley superior SWAT 4 and its expantion?

Simply because I didn't buy SWAT 4. This was my brother's game years ago, and I just never played it back then.

Lol. Fair Enough. SWAT 4 is a, by a country mile, a much better game. I would recommend trying it out.

IF you really pressed EVERY Button you should notice a menu pops up when you hit space. it shows all your items and its F1-12 keys ! think further fishbrain...

only a noob start playing a game without taking a look at the option and keybinds.

i was a kid when i  start playing it and i did a great job. i didnt knew back them the WASD movement. but i managed to finished the career.

YOU have INTERNET and  you are not a kid anymore i guess. so why you post a whole story about swat3 becaus you couldnt handle it ?

swat4 is a joke i own this game but it sucks its a bad noob game pretend to be a sequal of swat3 .. go and play your hollywood shit Ready Or Not next wannabe clown swat shooter...

glad that no kiddies got VBS2 Simulator

The whole point of this was to go in basically blind. There's no point reading the manual if I'm only going to play for a firm 30 minutes.