So I Tried...Football Manager 2019 Touch

Each edition of So I Tried… I will try a game that I have never tried before. Will I find something new to love? Will I find something new to despise? I'll take a full half hour, no matter how bad it gets or how badly I do, to see if this is the game for me. On this occasion, I will don my favourite sheepskin coat, seek out wonderkids, and prepare to fight off relegation and the wrath of the fanbase as I kick off a new career on Football Manager 2019 Touch on the Nintendo Switch. How do you spell P45? 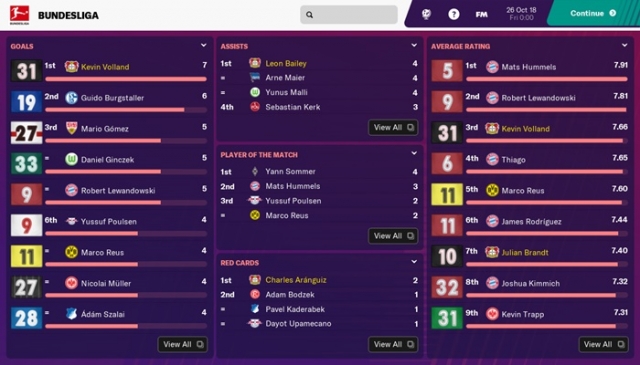 To be honest, I am pretty clued up when it comes to the old Football Manager games having been sacked many, many times by various sizes of club all the way back to the original Kevin Toms game on my ZX Spectrum. However, in recent times my managerial merry-go-round has been powered by the juice of a crumbling PC, where despite hardware issues, I did get the full-blown experience.

When I grabbed a Nintendo Switch I honestly didn’t even realise there was a version of the game available. So, when I began a download that added ‘touch’ to the title, my expectations were of a hugely watered down and simplified version of the Football Manager I knew and, regardless of sackings aplenty, still loved. I honestly expected a new breed of disappointment away from the usual I experience when the ref blows full-time on another dismal showing. I braced for limited options, a ropey match engine, and an overall shallow experience where I expected the ‘touch’ moniker to actually mean ‘lite’…very ‘lite’.

Football Manager 2019 Touch is actually a little masterpiece of a management sim. My initial doubts were washed away almost instantly into the traditional depths I was accustomed to with these games. The actual differences between the Touch version and the standard version of Football Manager are pretty minimal, and what this leaves is a game blessed with a ridiculous number of layers to dig through. Of course, half-an-hour with the game is barely enough to even faintly scratch the surface, however, I did enjoy taking the first steps with my new club, browsing the squad and the intricacies therein, a glance at the transfer market to see which players I could take down a division or two, and looking over the wonderful myriad of leagues and clubs out there. Then I played my first game, a pre-season friendly, and was delighted at how smooth the match engine ran, to be fair, better than my temperamental old PC used to manage. The element of press conferences and half-time team talks seemed to be absent and is something I will definitely miss, but overall this appeared to still be a chock-full package of footie management goodness!

The controls on the Switch seemed quite fluid and precise, although nowhere near as fluid and precise as a mouse, and the small screen in handheld mode proved adequate viewing for the predominantly text and stat filled game.

After 30 minutes that simply flew by I was left deeply impressed, much to the disappointment of my wife who is destined it seems to become an FM widow once again.

Undoubtedly yes! In fact, I already have. Over the past few days, this game has kept me awake at night, has given me a genuine use for my reading glasses, and continues to impress with its incredible depth.

Oh, and I got off to a flying start! A four-nil win at home to Burnley with my Newcastle side!

Followed by a run of six games without a win, a club languishing on the brink of the relegation zone and a nice early cup exit to boot. I guess some things never change.

So I Tried...Football Manager 2019 Touch

I've been playing a bunch of this recently. I'm certainly more of a rookie to FM (other than the mobile version a couple years ago) and I felt the UI and menus leave a lot to be desired. They can buy out sometimes and some things aren't explained very well - like player status badges just showings acronyms. Transfers are a little confusing for a rookie too (why is my scout suggesting I sign someone way out of my budget, for example). The more I play the more I get used to it but, idk, just feels like it's missing some polish (just loading the game up involves trawling through a dozen unskippable disclaimer/sponsorship screens).

u need to take the induction mate all will be explained make use of staff till you get the hang off stuff. Been playing since my cousin babysat me in 1999. A lot has changed since than. Failing that go back a few years they were a lot more simplified then. U can always download updates or helpful tools at fm scout.