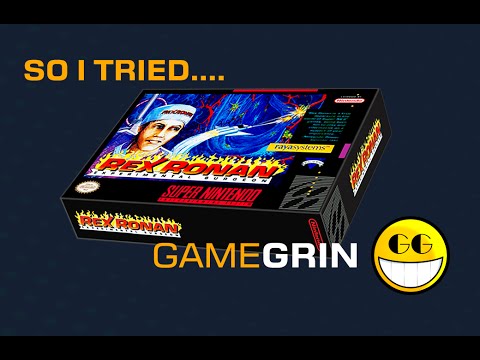 Each edition of So I Tried Retro… I will try a game that I have never tried before. Will I find something new to love? Will I find something new to despise? I'll take fifteen minutes, no matter how awful it gets or how badly I do, to see if this is the game for me whilst recording it for the video above. This time I went for the SNES version of Rex Ronan - Experimental Surgeon.

With such an amazing title, I can only assume it’s a rudimentary Surgeon Simulator! However, I know that’s not the case… I’m hoping for some kind of quirky platformer that allows me to chuck scalpels at people whilst wearing a head mirror. Although the ‘experimental’ part does make me wonder whether he’ll instead use lasers... A platformer where you, as Rex, must shrink down and save Jake’s life! He’s been smoking since he was 15, and working for a tobacco company for who knows how long, and is dying for vague reasons! But whilst you use your laser to eradicate pre-cancerous cells, tar and… nicotine… you are attacked by microbots, put there by none other than big tobacco! After all, if Jake recovers from his… whatever… he will tell people that tobacco is bad!

It’s an educational game, with platforming and in between the platforming you must fly your ship through the lungs. I’ve no idea whether there is more than that. And I will never find out. No, the aiming is terrible -- Rex always fires right, and you have to turn it towards the target, even if you’re facing left at the time! It’s a rubbish system. The flying levels aren’t any better, as you have to destroy globs of phlegm as you fly -- and you can’t always see it long enough to get into position to shoot it. It’s informative, but compared to some of Sculptured Software’s other titles it’s a joke. They made The Simpsons: Bart’s Nightmare! They went on to create WWF War Zone! Come on! There are better things I could be doing with fifteen minutes...