So I Tried... Need For Speed Most Wanted

I’ve never liked racing games, so of course this will reinforce my dislike. Yay, going around and around in circles or slightly-different-from-circle patterns! It’s my most hated aspect of any open-world game. Jak & Daxter, GTA, Saints Row… If it has mandatory racing it really takes me out of the experience. Yes, you have to drive the getaway car in missions - that’s different. You’re not stuck to ‘Finish first or redo the exact same five laps over and over again until you do!’, you can try a different route or a different weapon, not worry about shaving half a millisecond off of that one corner. So, this game has some sort of police chasing involved - that could be fun! If not, at least I’ll have some Trophies for doing this on my PS3… 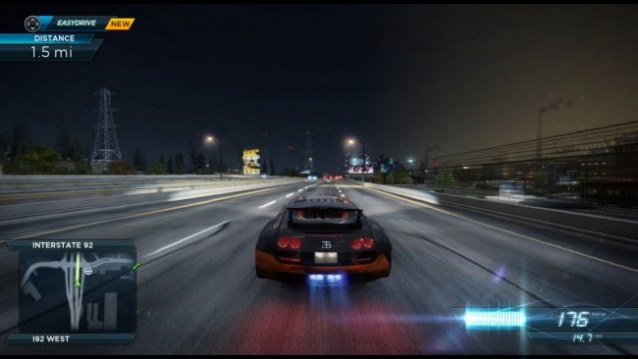 Well it’s certainly racing Jim, but not as I know it. The aim is to get in the top three of every race, earn enough money (I think that’s what it is) and then beat the Ten Most Wanted in a one-on-one race. Oh, then there’s the police chasing you if they see you speeding, or during some events and against the Most Wanted. Boy, are there ever police…

You start off in the default car, but you can swap if you find certain parked ones with the make floating above them. You can also customise them as you win parts in certain races. And the races are usually specific to each car, meaning you need to do them all to get all of the upgrades. In my play time I jumped in the second car I found, a Bentley, and stayed in it. Now, the tutorial is pretty crap, so I didn’t realise I had a nitro until I only had 2 races left to do in the Bentley - and I’d redone three of them many times. Even then it was an accident as I think you need to unlock it for each car.

It wasn’t until I was entering the second lap of one race, that I realised there were laps. Most courses run straight through checkpoints to the end, with no part repeated. I’d played street racers - and Street Racer - before, but they were exclusively circuit-based. Most Wanted puts the city streets to great use, with bridges and tunnels causing big obstacles, almost as much as the oncoming traffic. Once my Bentley was upgraded though, I was ploughing through them as easily as through police roadblocks. Surprisingly to myself, yes I will! I had great fun racing around, despite the huge amount of crashes and endless frustration at being passed despite having my nitro firmly pressed down. I would never play online (there’s other people there), but I couldn’t help but grin when I smashed my friends’ best time by almost twenty whole seconds. And the Most Wanted I raced, I got four Trophies the first attempt and another one on my second, successful, attempt.

If all racers are this fun, I apologise to racers. However, I get the feeling this is a rare gem amongst many, many circling-simulators. Apart from the long crash sequences and weird pre-race cutscenes (cop cars on the ceiling or doing synchronised donuts?), this was a fun experience. I’ll be playing this through - but I’m not buying five different DLC just for a few more cars.

So I Tried... Need For Speed Most Wanted