So I Tried… Sword of Asumi

From the looks of it, a high school visual novel of some kind. I’ve once again done no research, and only chose to do this one because I was scrolling through and saw one of the achievements was “Seduce and Drug”. I like a bit of titillation as much as the next male, so I installed it right away. Of course, it’s on Steam, so I’m not expecting anything hardcore -- you can murder the hell out of people and pay for sex in a car, but screw you if you want to play a game where you can have mutually consensual sex in bed. Not that the achievement I noticed exactly screams ‘consensual’... 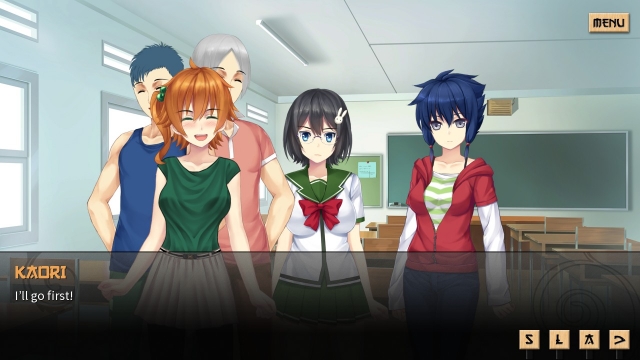 It's a well-drawn game, at least

It’s a samurai school visual novel, which gives you the option of killing people! It’s more complex than that, but it was quite a surprise -- though I haven’t played a ton of VNs before, but none of them have allowed me to kill or disable. But then, none of them have had me playing as an assassin.

Asumi is an assassin who has to infiltrate a samurai school and find someone known as Raven. She does this as a first-year student, and with no information on whomever Raven is, just that she needs to take them out. It’s interesting seeing Asumi, a stoic lone-wolf having to interact with people, and usually having to decide which dialogue option will result in more information, or not making people suspicious of you. Though if they saw her underwear choices, they would be suspicious as hell. 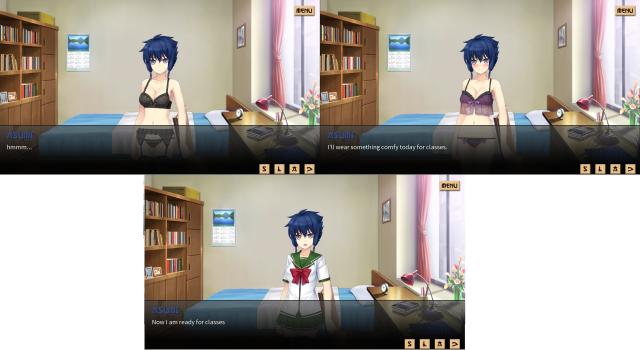 This is not underwear of someone unfamiliar with human contact - and how does that first one fit under her school uniform?!

As you can see above, the titillation is there even early in the game. The first set of sexy lingerie (because that is not everyday underwear) is seen twice in the first ‘day’ of the game, when she gets changed on two separate occasions. The third time, she goes from uniform straight to normal clothes. The second set is the next day, and as the game takes place over two weeks (from what I understand of the story so far), I fully expect fourteen different sets of lingerie. And I shall prove it to myself by playing this game more!

The storyline is intriguing, and I’m trying to see if I can finish with only one death (that damned guard literally asked for it…), as with all visual novels it has multiple endings. More endings means more achievements! And I really want to see what happens when you drug the principal...