For each edition of So I Tried… a member of GameGrin tries out a new game from their backlog. In today’s episode I bring you through my first hour or so in the modern classic Bloodborne. Upon repurchasing PS+ I found that I must have previously downloaded the game for free and never actually played it, why not now?

I have previously played the opening hours of both Demon’s Souls and Dark Souls 3 and found myself struggling to appreciate the atmospheric RPGs due to the stiffness of combat and the lack of any real narrative. From what I had heard elsewhere I was under the impression that Bloodborne was different from the other Souls games due to an increased emphasis on movement and speedy attacks. Fun movement mechanics are something I really love in games and given my struggles with the previous From Software titles, I had hoped this change would aid my entry into this beloved series.

After waking up in a very Resident Evil looking mansion on an operating table, my new character and I began exploring. Unexpectedly the Lovecraftian horror aesthetic of the game is much stronger than I had anticipated, and that does add a certain charm that I always found lacking in other titles of the same style. 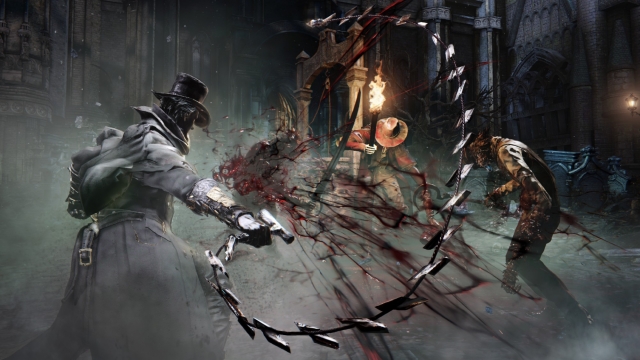 Immediately you find yourself fist fighting a werewolf and the difference in the combat system is apparent from the word “go”. As opposed to Dark Souls before it, Bloodborne is a game that requires a lot less of a defensive approach and allows you to make swift strikes and evade with much more effectiveness. Upon receiving my first weapon (I decided to use the cane) I found smaller fights more fun.

The weapon I chose could transform between a sword-like weapon and that of a bladed whip and I found myself upon the streets of Yharnam able to deal with the common humanoid enemies with ease, even to the point where I was taking on legions of them with just my whip. I didn’t get much further than this however because I decided to take on a rather large, optional enemy called an “executioner” repeatedly and got very in over my head. No matter what I tried he wouldn’t go down and I became very stubborn. Unfortunately my Bloodborne experience ended with that as I had to go do something else, but one day I will execute the executioner. He will pay for this!

The answer is a big maybe. As much as I did enjoy Bloodborne more than the Souls games I had played previously, I still didn’t really connect with it on any meaningful level. That may be my own fault for being a stubborn fool and taking on an enemy way too strong for my level but after I was done playing I had no real desire to pick the game back up. I am almost certain that if I force myself to start playing again I’ll find a real gem and potentially a connection with the series but I couldn’t tell you when that time will come, especially with plenty of new games to sink my teeth into on the horizon. For now Bloodborne will sit in my back catalogue but one day I will return, I’m promising that to myself now. I just need an excuse to delve deeper.