In each edition of So I Tried… we jump into a game that we have never tried and see what we find. Will it be something new to love? Something new to despise? Giving the title just under an hour to see if it is the game for me no matter how bad it may be. I’m not usually into 2D platformers, being born into a gaming landscape where Crash Bandicoot was trash talking the little moustached Nintendo plumber and nowadays huge sprawling open worlds and bloody virtual battlefields fill my gaming time. Because of this 2D platformers never even get a glance from me, that is until one gains accolades from what seems like every outlet in the industry and goes up against giants like God of War and Red Dead Redemption 2 for last year’s’ game of the year. But after Celeste has amassed such colossal hype, can the charming little indie’s quality stand up against the expectations all the awards have given it? Especially for someone who doesn’t particularly like platformers? 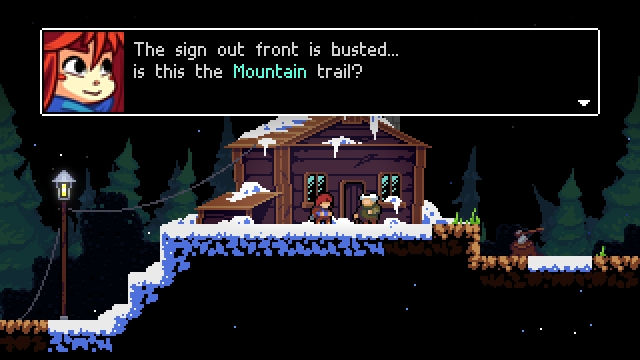 From the many, many videos I have seen about this game, Celeste seems to be a solid platformer with a charming pixelated art style and cast of relatable characters. But behind the initial whimsy there seems to be a surprisingly dark and emotional story about a girl’s quest to climb a frankly ridiculously difficult mountain. While I don’t know the exact mental health issues the game tackles, I am more than prepared with tissues at hand for an emotional ride. “Life changing” is a phrase thrown around a lot when it comes to this game and I’m always up for an experience like that.

And it really is a solid platformer, in many senses of the word. The actual act of ‘climbing’ this devilish mountain is a finely tuned and satisfying experience, even if sometimes the game doesn’t quite read which direction I wanted to dash in. The mechanics are constantly evolving with new abilities/environmental helpers and deadly obstacles. Celeste is also solid because it is infuriatingly hard, even just within its first level. This might be just because I am bad at platformers, but dying 40 times in a row because of one just out of reach ledge had me almost launching my controller at my wall. But because of this challenge, figuring out the correct path and then executing it just right so you finally get to see another screen is euphoric because of how impossible the task felt not 5 seconds ago. Onto the game’s emotional backbone, the story. From the get-go you are instantly connected to the pixelated girl on screen. From being able to name her whatever you want - thankfully my name (Sam) is gender neutral – to seeing the all too familiar struggle of someone trying to prove that they can in-fact ‘just do it’, you can’t help but care for and need to see her succeed. This loveable quality extends to the rest of the quirky cast that I have encountered so far and with such a strong emotional connection being forged so early on, we are surely ramping up to a heart breaking sequence of events. “Life changing” here we come. If the game’s tough as hell platforming puzzles let me, definitely. Outside of the smartly engineered platforming and stages that are feats of gaming on their own, I am just all too invested in the plights of this broken girl and how this journey will change, and hopefully, better her.

Celeste Had Most of it's Sales on Switch