So I Tried Retro… Star Trek - The Next Generation - Future's Past

This is one of several Star Trek titles that came out on the 16-bit consoles, that I know nothing about. At least with 25th Anniversary, I knew that it was a point & click adventure before going into it. With Future’s Past, I couldn’t tell you if it was a Dr. Mario clone. I don’t think it is, but wouldn’t that be a surprise? That’s the good thing about most retro titles -- a lot of times you’ll go in completely clueless. A precursor to what would eventually become Star Trek Bridge Commander. You answer a hail from a Federation scientist, under attack from Romulans. If memory serves, the Romulans were often the enemies in The Next Generation, so that makes sense. Once you tell Data to set course for the right planet (or check the Briefing Room to remind you what she said, as there are no obvious hints in SNES games) you arrive in orbit. You select an away team and beam them down to the surface. The control scheme took some getting used to, by which I mean I killed the scientist the first time, but once you kill the Romulans and save her, you’re on your way back to the ship.
Where you take command of the battle between the Enterprise-D and a Romulan Warbird! It’s frightening how similar combat is between this and 25th Anniversary. 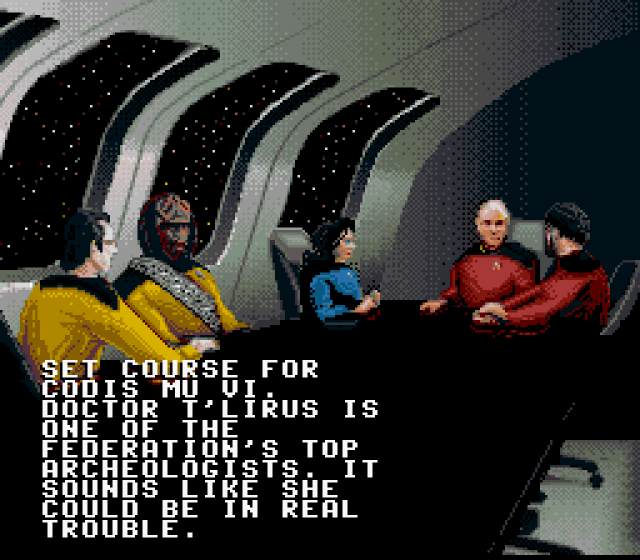 I think I’ll certainly give it a go. Admittedly, I had to consult the manual so that I didn’t hit the phaser button again, but it was certainly an experience. I’ve been watching a lot of Deep Space Nine recently, but after that I’ll be going back to The Next Generation -- so this is certainly on my sensor grid.