A point & click game based on the original series of Star Trek, starring William Shatner. It’s funny to think that this game is half as old as the first episodes of Star Trek, and that it’s literally in the title of the game. Other than it being a point & click, I don’t know anything about it. I believe there were a few TOS (The Original Series) point & clicks, which as a fan of the franchise and the genre, is exciting to me. 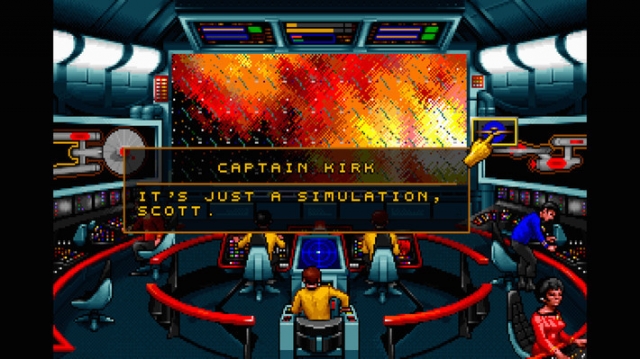 The first game in a long time that has made me regret not checking the manual. It’s a point & click at heart, but it seems Telltale took some of their gameplay elements from Interplay, due to the ‘act quick or die’ parts! You start off going straight into a practice battle with another Starfleet ship -- needing you to activate weapons, shields and blast your opponent out of the stars! I was expecting a nice and calm Star Trek adventure with Kirk, Spock and Bones, I wasn’t expecting to need the keyboard… Once that was done (I lost), I had to set course for a planet -- using a star chart with no names on the systems. Luckily I was able to Alt-Tab out, to open up the star chart (thank you GOG!), and have it on my second screen.
The surprises weren’t finished there, however, as when I eventually beamed down I was soon confronted by enemies and gunned down! Luckily I had recently saved, and began methodically pressing buttons, whilst glancing at the manual which now sat on the other screen. Then I realised the right mouse opened a menu which allows all of the actions… I killed the enemies and returned with the berries I was after! But spent seven minutes trying to work out how to hand them over... 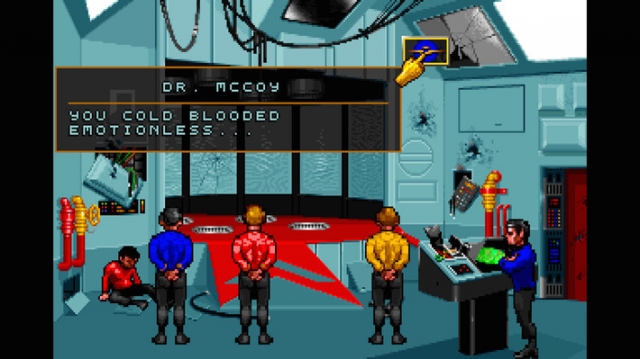 Yes, I will! Once I’ve finished reading the manual, and found the Clue Book I downloaded (thanks GOG!)... It’s voiced quite brilliantly by the original cast (and some noticeably professional voice actors, Red Shirt Guy…), and the script so far is pitch perfect. I’m honestly loving it. Once I know how to actually play it, and not wind up in the wrong system full of Klingon Birds of Prey, I’m sure the experience will be perfect.