So I Tried… Dungeons & Dragons: Daggerdale

Recently, I started taking part in a Dungeons & Dragons podcast, DunGame and DraGrins, so I figure it will be like that. Except in third person. I’ll be honest, I just wanted to see if I could figure out how a dwarf is supposed to sound. My character, Nevan Crimsonshine, may have rolled a one in Intelligence, but he still sounded too much like me. 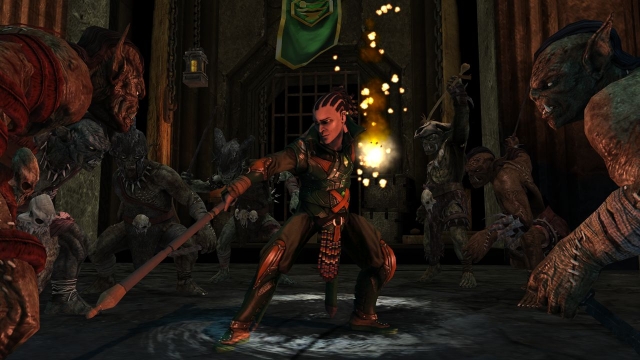 The evil Rezlus has constructed a tower, and wants to take over Daggerdale. It’s up to you - as one of four characters - to clear out the tower, and murder him, in a third-person (or optional isometric) view. I played as a dwarf (whom I named Nevan Crimsonshine of course), and selected some abilities before heading in. You have a long-range and a melee attack, and can take potions. There is also your race ability, but I didn’t spend a long time reading exactly what that was. You go somewhere, talk to someone, then go off to murder some goblins or skeletons - rinse and repeat.

It’s very boring, and not very fun. My only options in combat were “attack and get hit” or “run away”, despite my having a shield there was literally no way to use it. Honestly, I’d much rather go back to DunGame and DraGrins - at least if Nevan had a shield, he’d be allowed to use it, and the writing is better.